Renowned Melbourne artist, Mirka Mora’s career spanned more than half a century. Her colourful distinctive works and creativity adorn Melbourne, from mosaics on St Kilda Pier, Flinders Street Station and her many restaurant murals. Mirka was part of the CAE family for over 23 years as a teacher, running countless workshops and short courses. Mirka Mora: The teacher showcases a selection of her remarkable work.

When: July 31st to August 22nd
Where: Melbourne City Library

Discover the many facets of the rich and vibrant life of Mirka with our Unique Mirka Mora talk.
When: Wednesday 7th August

Mirka Mora, Melbourne’s national treasure and most-loved artist Mora passed away on 27 August 2018 at the age of 90. Mirka’s career as an artist spanned more than half a century. Her colourful distinctive works and creativity adorn Melbourne, from mosaics on St Kilda Pier, Flinders Street Station and her many restaurant murals. One of our iconic trams travelled the streets with her magic touch for many years, now resting in a Melbourne backyard. One of Mirka’s wonderful murals is displayed at CAE on Flinders Lane, where she taught for 23 years. She will be sadly missed by the staff and students who knew her.

Mirka and her husband George arrived in Melbourne in 1951, leaving behind the horrors of the Pithiviers concentration camp during the Nazi occupation of France in World War II. Mirka became a pioneering figure as a restaurateur and artist in the Melbourne’s art scene. The restaurants and café’s she ran with George housed several of her own works of art as well as many from other Melbourne artists. 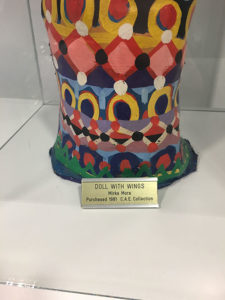 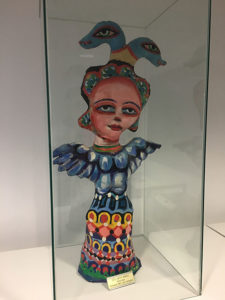 Mirka conducted countless workshops over a period of 23 years at the CAE. She poured hours of time and energy into preparing and running both one-day workshops and multi-session short courses. Mirka thoughtfully considered and adjusted workshops to suit her students and as a result her classes became quite cathartic in dealing with past and present experiences for both herself and her students. The devotion to her students extended beyond her courses, Mirka often collaborated with students and got them involved in large projects, including painting train carriages in Castlemaine and putting together proposals for various commissions.

After many years working at CAE, Mirka was thrilled to receive the Sir Zelman Cowen medal for her exceptional contribution to adult education, an arena in which Sir Zelman himself had few peers at the time. Her work with CAE took her across Australia and country Victoria to Queenscliff, Bendigo, Wodonga, Mildura and Tasmania. 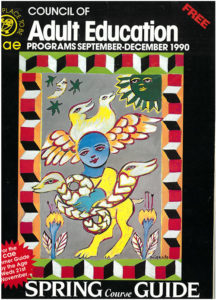 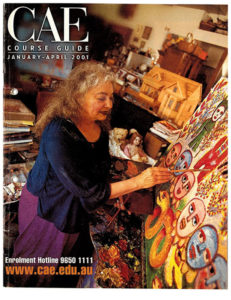 CAE are privileged to have several commission pieces created by Mirka, including a large mural at the Flinders Lane studio with the assistance of a few students. In preparation for this artwork, Mirka considered the deeper meaning of CAE. She decided to use the theme ‘intelligence’. Taking inspiration from her favourite books Mirka created an artwork that was her own interpretation of intelligence, “I think of a word, say, ‘intelligence’, and there it is in the [CAE Course Guide] as a lady with wings on her head.” (p.242)

Mirka was not just an inspiration to her students, but influenced teachers and staff at the CAE. Karen Manwaring, CAE writing teacher of almost 20 years, admires Mira’s mural at the Flinders Lane campus. Karen said “Her mural has stayed there as this kind of inspirational bit of creativity among all the change the CAE has been through. It has meant a lot to me to see it hanging proudly. She will be missed.”

Glenn Willowsmith, freelance illustrator and CAE Customer Service team member, remembers Mirka with great fondness. “My experience of Mirka was one of a vibrant, funny and friendly lady who I often chatted and laughed within St Kilda where I lived there in the early 2000s. In her early seventies at the time she had a naughty sense of humour and love of life and people. I did not know her as a close friend but a local who I loved bumping into, often at the supermarket checkout.”

”I have been a big fan of her work since my art school days in the early 80s. She gave Melbourne the spark it needed and we were lucky she adopted us [at the CAE]. She will be sadly missed and fondly remembered.”

Rob Large, CAE’s former Product Manager, remembers Mirka’s influence at the CAE. ”Mirka was a breath of fresh air. She was a vivacious person that captured the Melbourne art scene of the day and a larger than life character.”

”There weren’t many organisations around for short courses for adults and Mirka had such a strong presence in the Melbourne art scene. She taught many classes at the CAE because in those days if you were going to be involved in an organisation in the 50s and 60s, it was the CAE.”

Mora’s legacy extends to the CAE Book Groups program. Her memoir Wicked but Virtuous has been on the CAE Book Groups reading list since it was first introduced in 2002, and sixteen years later her book is still a popular request with book clubs throughout Australia. Mora’s memoir covers her rich and exciting life as an artist: from her migration to Melbourne to heart-warming anecdotes about her workshops at the CAE (pp.155-174).

Her amazing contribution and association with CAE and the many students she impacted over the years will always be remembered fondly. CAE hold both a great gratitude in knowing Mirka and are sad at the news of her recent passing.

Every city has great artists; we just have to find them and love them at our own peril, if we dare, for they must go, leaving behind our youth and memories that daydreamings are made of. They are étoiles filantes in the sky, shooting stars on hot summer nights. (p.43)