According to the Chinese zodiac calendar, 2023 will be the year of the water rabbit and begin during the Chinese New Year between late January and early February. The water rabbit symbolises peace, prosperity, vigour; with 2023 set to be a year of hope. This zodiac sign only happens once every sixty years, the last year being 1963.

The CAE is lucky enough to be in walking distance to one of the oldest Chinatown precincts in the west. Melbourne’s Chinatown was established during the 1850’s gold rush, Chinese immigrants began boarding houses and eventually bought property on Little Bourke Street to offer lodging, supplies and food for miners heading to the goldfields.

A lot has changed since then and we would highly recommend visiting the Chinese Museum near Little Bourke Street to learn more about the fascinating Chinese-Australian history in Melbourne city or if you wanted to explore more of Melbourne the CAE offers a range of walking tours.

Since the early 20th century, Melbourne’s Chinatown has continued to grow and resemble what we see today, the decorated archways welcome visitors on little Bourke Street at the corner of Swanston and Exhibition Street. Chinatown is also an important spot for many festivals and cultural celebrations that take place throughout the year, the most notable being Chinese New Year. 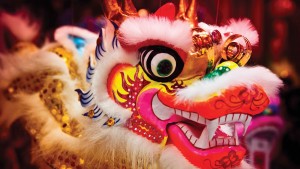 Lunar new year celebrations take place over the span of one week, this year Chinese New Year’s Eve is on the 21st and Chinese New Year’s Day is on the 22nd of January. Chinatown’s festivities often spill across the city with many other businesses and restaurants embracing our long and vibrant tradition with events of their own. Chinatown itself will be alight with dancers, music, decorations, food stalls and more. The famous Lion Dancers roam the streets performing traditional dance and the dragon parade will take place on New Year’s Day.

Feeling inspired? We have several arts focused short-courses that teach Toa calligraphy and exercise classes in Tai Chi. Alongside our language courses for learning Mandarin, we offer classes for both beginners and intermediate speakers. Did you know that Mandarin is the most widely spoken languages in the world? Learning this language will open doors for your career and the potential to communicate with 955 million native speakers.