Celebrated on July 1st, Canada Day is the national Holiday of Independence. Formally known as Dominion Day, Canada Day commemorates the amalgamation of the Canadian three territories into self-governing dominion of Great Britain on July 1, 1867. As national patriotism grew from the 1960s, many Canadians began to refer to the day as ‘Canada Day’. The moniker of Canada Day was finally implemented in 1983, 115 years after Dominion Day was established and 1 year after Canada became fully independent in 1982.

Canada Day is celebrated with large and modest parades throughout the country, fireworks, citizenship ceremonies and a national public holiday. Known for being polite, agreeable and friendly – Canadians have a much-loved reputation throughout the world and Australians and Canadians often get on famously with a similar temperament and sense of humour. 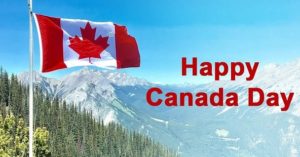 This July, we celebrate the unique voice of Canadian authors with our top 15 Canadian books from Dialogue.

Top 15 Canadian Books from our Dialogue

Nine short stories from a master of the short story form. Munro writes about ‘the lives of girls and women’ in her own mid–western rural Canada. “Whole lives come into focus suddenly through single events or sudden memories which bring the past bubbling to the surface … here are people who reinvent themselves, seize life by the throat.’”

Behrens brings alive the catastrophe of the Irish famine with Fergus O’Brien, who is left alone at the age of fifteen. Sensing that he must keep moving if he is to live, he survives privation, danger and betrayals on his route to Canada.

1867, Canada. As winter grips the isolated settlement of Dove River, a man is brutally murdered and a 17-year-old boy disappears. Tracks outside the dead man’s cabin head north. One by one journalists, trappers, and traders set out across a desolate and dangerous landscape; pursuing the tracks before the snow erases the past for good. But do they want to solve the crime or exploit it?

Arthur and Jake Dunn are as different as two brothers can be. Arthur, who is older, is shy, dutiful and set to inherit the family farm in northern Ontario, while Jake is young and reckless. When Laura arrives in their 1930s rural community their uneasy relationship is pushed to the edge. A beautifully told story of love and family that spans the changes of rural life from the Great Depression to World War II.

During WWI, young Dora befriends the elderly Miss Babineau, midwife in their small fishing village in Nova Scotia. Together, they help the women of Scots Bay through difficult labour, infertility, and even marital troubles. But when Dr Gilbert Thomas moves to town with his promise of modern medicine, everything changes.

Dr Vincent Lam draws on his life experience as he follows a group of young doctors from medical school to emergency rooms.

This novel interweaves an Australian girl’s search for her father and her origins with her physicist lover’s mind play about the origin of the universe, time and uncertainty. It ranges from Queensland’s rainforests to Boston, to MIT and Toronto; from apparently sheltered Australian and Canadian lives to the aftermath of the Holocaust.

A Canadian painter, returning to Toronto for a retrospective exhibition of her work, is caught up in a reflection of her life and of the driven relationship with her ‘best friend’, Cordelia. Comic, mind-stretching, terrible in its grasp of children’s needs and cruelties, hopeful – and a compulsive read!

Norah, beloved adult daughter of Reta Winters, opts out of normal life in order to sit on a gritty street corner mutely displaying a sign around her neck that reads ‘GOODNESS’. Her mother’s search for what drove her daughter to this turns into a funny meditation on where we find meaning and hope. A suspenseful fiction about supposedly ordinary lives from this exceptional Canadian novelist.

This Canadian novel examines a family whose life within their fundamentalist Mennonite community has reached a crisis point. Narrator, teenaged Nomi, is superbly sustained, her voice is funny, dark, and piercing. Tuned in to every hypocrisy yet barely conscious of her own confusion, she is torn by her love of those who have left and the father who remains.

When sixteen-year-old Nao’s diary washes ashore on a lonely Canadian coastline, Ruth feels compelled to read it. Nao’s life is turbulent: her father is suicidal, she is tortured by schoolyard bullies, and her only friend is her grandmother, a Buddhist nun. Ozeki weaves together philosophy, the nature of time, cultural identity and the true meaning of courage in this absorbing, beautifully written novel.

A cargo ship carrying zoo animals flounders at sea, and Pi, a 16-year-old Indian boy, is stranded on a life raft with a hyena, an orang-utan, a zebra and a Bengal tiger. He must use all his daring and wit to survive. An engaging, dazzling novel.

Who in the family will care for its ageing patriarch, now helpless after a fall? His daughter’s family take him into their crowded Bombay apartment. The resulting dilemmas and pressure are interwoven with the old man’s remembrances of a forbidden love in his earlier life. ‘A luminous compassion, an abundance of life and piercing moments’.

Five-year-old Jack lives in one room with his mother, and believes they are the only real people in a world that exists only within ‘Room’ – until his mother confides her terrible secret. Jack is by turns poignantly naïve and wise beyond his years, and his story will haunt you long after you finish this powerful novel. Disturbing content with plenty of material for discussion.