Luigi knows languages. This native Italian speaks four languages: Italian, German, French and English and he has a passion for teaching language to others.

In Italy, he graduated from university with two foreign languages, German and English. He developed an interest in German while growing up in a town that attracted many German tourists. Luigi expanded his language skills by teaching English to high school students and speaking with German clients on the phone. 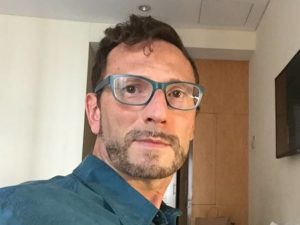 After moving to Australia to study English Literature, Luigi continued his teaching career. He began to teach his native Italian at CAE in 2019. Luigi now teaches Italian, German and French with us.

“As a multilingual myself, I can empathise with students as I have been in their position, as I teach two out of three languages that are not native to me. I can identify the problems that learners might encounter, as the chances are I had the same issues!” Luigi says.

He believes that learning a language in an online setting can be ideal. There is more opportunity to integrate audio-visual material, interaction between students is made possible through breakout rooms or open conversations, and you can incorporate games that elevate the learning experience.

“I have seen students learn a language for a multitude of reasons. There have been people married to someone international – and want to return to their country to live and work. I have had students who are going to study overseas and I have even taught an Opera singer who wanted to learn the meaning behind words they were singing and to finesse their pronunciation.”

However, Luigi says the reasons for language learning can also be more abstract. These reasons can include an affinity with the country or the people, the culture, art, writing music, history, or even the technology of a particular place. By having an emotional connection to another country, you automatically also become interested in its language.

Learning a language is about more than words and grammar. It can also tell you more about society and culture itself. For example, Luigi explains that the German stereotype is being orderly and rule followers – but the German language is actually often chaotic and full of contrasts. “German is quite a funny language,” Luigi says.

“We teach languages here at CAE quite practically – simple things like ordering a meal or reserving a room in a hotel. Then we can expand wider than just being a tourist. You learn the differences between formal and casual phrases. There are ways of speaking to become more accepted by native speakers. They can see you making an effort and that goes a long way.”

Learning a language can be satisfying for both the student and teacher. Luigi enjoys it when he can see it ‘click’ for the student.

“It is the way they can start to understand videos and conversations on an enhanced level, not just basic and everyday language. As the language becomes more complex, the greater the student’s level of comprehension and understanding of context grows. This is a great moment for me as a teacher.”

Luigi’s advice to students just starting out is not to worry in the beginning about speaking in full, complex sentences but rather to focus on reading, listening and absorbing. He believes we can learn much from repetition and hearing, and this is not always a conscious effort. Think about engrossing and immersing yourself in the language in an enjoyable way such as watching films and listening to music.

There are so many reasons why learning a language can be beneficial. Tangible and proven advantages include: improving memory, increasing visual and auditory responses, and helping with your own language and vocabulary skills. Luigi also believes that other benefits include: breaking down social barriers, opening up your horizons, discovering different ways of thinking, seeing the world, and learning about different points of view.

“Learning a language can be good for everyone. Some people don’t think they are cut out for learning a language, but they may not have found the right one yet, sometimes the language chooses you. Learning a language takes effort, but the rewards are great, it can also be quick as you pick up words and phrases rapidly, but at the same time, a lifelong process, a growing process. When you challenge yourself that is when you have the most growth and learn the most. It is good to explore what learning a language means to you. It’s an enriching experience you can share with others in your class as you learn and grow together. With travel an option again, now is the perfect time to prepare and make the most of your trip by learning a language. You gain so much for insight, and enjoyment from the whole experience by knowing a bit of the language of your holiday destination and engaging with the locals in a more meaningful way.”

Are you interested in Learning a Language with Luigi? Check out his classes below: