Interview with Emily Brewin, author of Hello, Goodbye [B2271]

Hello, Goodbye  was influenced by your aunt’s experience of being single and pregnant in the 60s. How much was fact and how much was fiction? 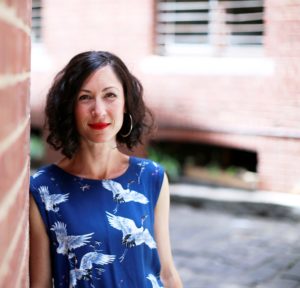 I interviewed my Aunt Judis and many other women around their experiences of forced adoption in the 1960s and early 1970s. I also read many personal testimonials from the senate inquiry into former adoption policies and practices that culminated in Julia Gillard, Prime Minister at the time, to issue a national apology in 2013 to victims of forced adoption.

Between 1951 and 1975, an estimated 150,000 babies were relinquished to state and religious institutions by mainly young unmarried women. Many of these women report being coerced or physically and emotionally bullied into giving their children away. The secrecy and shame they endured during their pregnancies and birth often remained with them for life, leading to anxiety, depression and difficulty forming intimate relationships.

The information I gathered through this process informed the characters and their experiences in Hello, Goodbye, especially my protagonist May. So even though the book is fiction, it was shaped by factual events and personal stories.

Your novel explores a lot of social issues that were dominant in the 60s, such as second-wave feminism, forced adoptions, the hippie movement and the anti-war protests. How much research did you do? And did you intentionally set out to explore these themes in the novel?

I’ll start with the latter part of this question. Although I knew that I wanted to tell the story of a young unmarried woman in the late 1960s, I don’t think I intentionally set out to explore these issues. However, it was inevitable that I would tackle them because of the historical era that Hello, Goodbye is set in. Western society was undergoing great change during this time. Conservative post-WW2 values were slowly giving way to more progressive views on women’s rights, sexual freedom and international politics. It was natural that my characters’ lives would reflect this shift.

I conducted a lot of research into these issues during the development of the novel. Much of this was interview based. I spoke to victims of forced adoption, returned Vietnam veterans and people involved in the anti-war movement. I also read or watched news media from the period as well as any other relevant information I could get my hands on. Conversations with my parents, who were in their teens and early twenties in the late 1960s, also helped flesh out some of the finer details such as fashion, food and language etc. 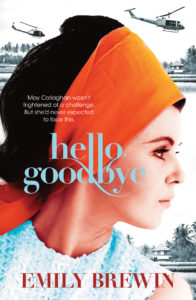 How did you come up with the title of your novel, Hello, Goodbye?

The title Hello, Goodbye came about just before the book went to print, which is very late in the production process. Before this, it had a number of other working titles including Let There Be Light, which we decided wasn’t quite right. Hello, Goodbye was chosen for its relevance to certain themes in the book. It is also the name of a Beatles song that was released in 1967, around the time the novel is set. Finally, the new title was much catchier than the alternatives.

What books inspired you to write Hello, Goodbye?

I read a number of autobiographies while researching Hello, Goodbye, including Well Done, Those Men by Barry Heard and Ten Hail Marys by Kate Howarth. Apart from these, the writing that inspired me most were the personal testimonials submitted to the senate inquiry into forced adoption. So many brave women found the courage to speak out about their often horrific experiences after suffering years of silence and shame. Their ability to share these stories inspired me to keep writing even when I felt like it was all getting too hard.

What message do you hope that readers will take away from your novel?

I hope my novel encourages readers to fight for what they believe in, to have faith in their own convictions and to see the world in shades of colour rather than just black and white.

Can you tell us a bit about your second novel, Small Blessings? 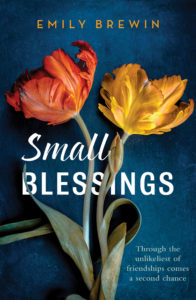 Small Blessings, released in February 2019 by Allen and Unwin, is the tale of two women, Rosie and Isobel, who live very different lives. Rosie is a young mother struggling to bring up a son on her own after escaping a violent relationship, while Isobel, a successful lawyer, is coming to terms with her estranged mother dying. When tragedy strikes, Rosie and Isobel are thrown together, finding a common ground that may just help see them through.

The novel is contemporary but like Hello, Goodbye, is also set in Carlton in Melbourne. I’m not sure why this is the case, apart from the fact I visit Lygon Street often to write and drink the great coffee on offer there.