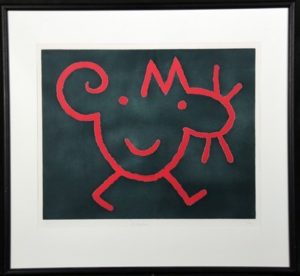 Arts Technician, Paul Compton began working at Box Hill Institute’s city campus in April. It is the same location as the short course provider, CAE Melbourne, and his attention was drawn to the many examples of artwork that adorn the office walls. He said, “It’s wonderful to know what treasures are hanging in the hallways, corridors and foyers we walk through every day.”

The CAE art collection has been an ongoing project of acquired and donated pieces by renowned Australian artists, CAE teachers and former art students. The collection encompasses painting, textiles, printmaking, drawings, ceramics, mixed-media, photographs and sculpture. Its earliest piece is a black and white photograph of the 1948 Summer School Drama Class, when theatre classes were run at the Russell Street Theatre, and its latest piece is from 2011.

Most works in the collection are on display at various locations around city campus Buildings A and B. For example, in the hallway of Level 4 of Building B, there is a beautiful Charles Blackman 9-colour screenprint from 1997 called Alice’s House. Blackman is renowned for his Alice in Wonderland inspired works.

On Level 2 of Building B, a spectacular Mirka Mora painted mural entitled Happiness Brightens the Hallway. A playful Michael Leunig etching called The Gipsy Rover can be spotted on Level 5 and an original John Perceval sketch hangs in the foyer of Level 6, Building A. 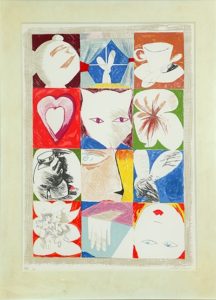 Some pieces are not currently on display but rotate over the years. Paul said, “We hope to feature some of the artworks in future exhibitions in a manner similar to the recent Mirka Mora: The Teacher exhibition we put together at the Melbourne City Library art space earlier this year.

“I don’t know how much the collection is worth but it is invaluable to us because it helps tell the story of the institution, Australian art history and the artistic journeys of our students and our teachers past and present,” he said.

Find out more about our wide range of art classes